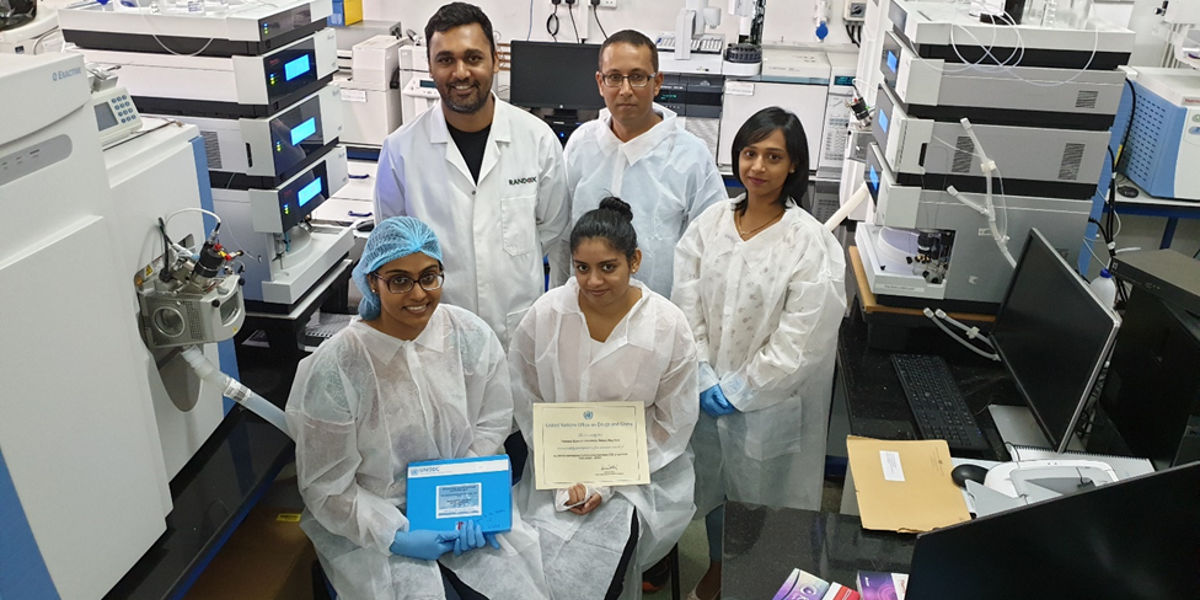 Mauritius is an island of 1 864 km2, located 2 000 km east of the mainland African coast and 855 km from Madagascar. It has a population of 1.2 million, and an economy based on agriculture, exports, financial services and tourism.

In Mauritius, the Forensic Science Laboratory (FSL) was established in the 1950s and is the sole provider of forensic and advisory services to law enforcement agencies. It is also becoming an increasingly prominent forensic service provider in the region.

The Toxicology Unit has always been an essential part of the FSL. In its early years, the Unit dealt with limited resources to provide the required service. Alcohol level determination in blood and urine was performed by distillation and titration methods. Only a few samples per day could be analyzed. Analysis of drugs and poisons in body fluids was performed by liquid-liquid extraction followed by thin layer chromatography on laboratory prepared plates. Reference standards were scarce, with some provided by the UNODC. Color tests were used to identify poisons such as cyanide, metaldehyde and paraquat. Carbon monoxide (CO) levels in blood were analyzed by micro diffusion in a Conway cell. Ultraviolet-visible spectroscopy was the only instrument used for identification of poisons and drugs.

In 2000, the FSL left the umbrella of the Police Medical and Scientific Division to become an autonomous body under the Prime Minister’s Office. The laboratory has developed its quality management system, gaining its ISO 17025 accreditation in 2011. It is now participating in the International Collaborative Exercise (ICE) for biological samples organized by the UNODC. FSL was the winner of the Innovation and Improvement Award in 2015 and the Public Services Excellence Bronze Award Winner in 2018.

The current Director of FSL, Mrs. GM Madhub-Dassyne, has a commitment to modernizing the Toxicology Unit. The emergence of New Psychoactive Substances (NPS) has led to the purchase of mass spectrometers coupled to liquid chromatgraphs. NPS analysis and novel compound identification is still one of the main challenges facing the Toxicology Unit, together with turnaround time and backlogs. To meet this tall order, new tools such as in silico methods for predicting metabolism and mass fragmentation, and with multi-stage fragmentation (MSn), are used for structural elucidation of unknown compounds. About 40 NPS have been encountered in seized material analyzed by the FSL over the last 5 years.

The FSL Toxicology Unit, which treats about 1 800 cases per year, is now expanding its services to include drugged driving, workplace drug testing, drug facilitated crimes, hemp product analysis and even clinical (hospital) toxicology. Equine (racehorse) doping might also come under its purview. Furthermore, the Unit aims to achieve designated status for the analysis of chemical warfare agents by the Organisation for the Prohibition of Chemical Weapons (OPCW). With its 50 employees, the FSL thus covers a great deal of ground in toxicological applications!